When it comes to ticking things off one’s Bucket List, there is little that compares to the thrill of a Formula 1 Grand Prix. As a lifelong fan of Formula 1 fan, I had been looking forward to my first Grand Prix experience for a long time, having driven around the Monaco Grand Prix street circuit earlier this year. In the aftermath of this casual drive (the Monaco Grand Prix takes place on public roads,) the urge to see one of the 20 races on the calendar was stronger than ever.

I chose to experience the Belgian Grand Prix in Spa Francorchamps, as one of the races closest to Copenhagen, where I live, and faced by exorbitant accommodation prices in and around Liege, Belgium, I ended up spending 2 days in one of the best Airbnb stays I’ve been on in the border region of Eiffel, Germany.

Here are some of my tips and tricks for how to get to and experience the Belgian Grand Prix, for anyone who wants to experience a Formula 1 race – fans and newbies alike. 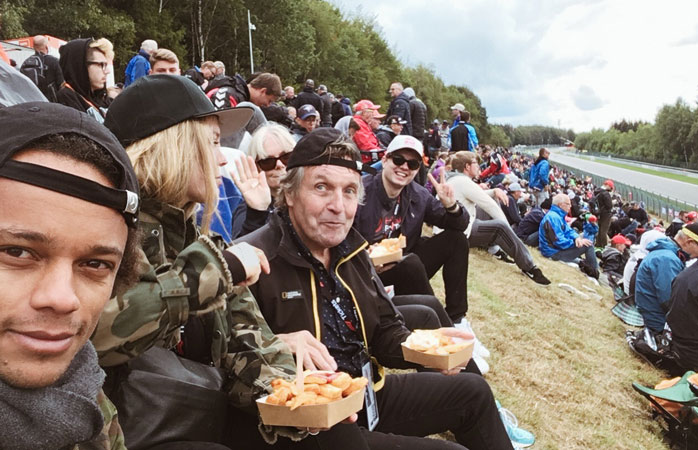 The Belgian Grand Prix in a Nutshell

The Belgian Grand Prix is one of the quintessential classics on the F1 calendar, snaking through lush forests in The Ardennes Forest for around 7 kilometres, thereby making it the longest circuit in the series.

Unlike some of the more modern circuits, Spa retains a rustic appeal that gives it an iconic, festival-esque feel. Spa is all about Pommes Frites, sausages and an overdose of Mayonnaise in changing weather conditions where the sun shines on one part of the circuit while there’s a downpour on the other. For this reason, pack your bag with essentials such as brollies, rain anoraks and wellies – it has rained at Spa at some point or other in each race for many years now. 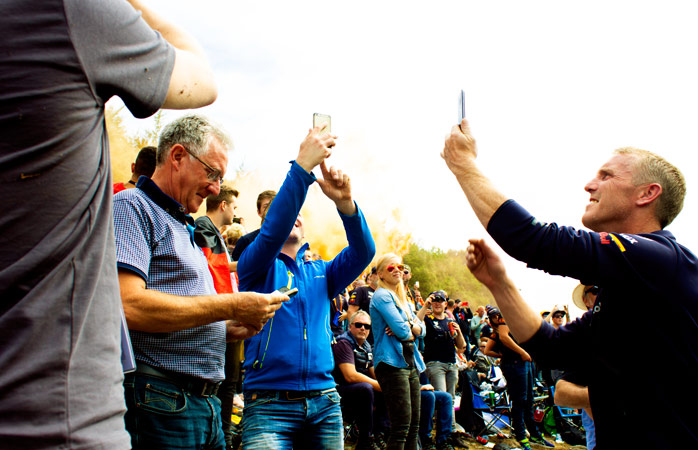 Fans galore: Spa Francorchamps is all about mingling with the fans of other racing teams @ Kortbaek_Travels

Beverages and refreshments at Spa are very pricey for what’s on offer (a small portion of Pommes Frites, for example, costs 7 Euros, while a micro-cup of coffee retails for 5.5 Euros). Packing light snacks and refreshments of your own is, therefore, a good idea, just make sure they are in plastic, not glass containers if you want to get let past security.

Spa’s proximity to The Netherlands also means that the event is visited by legions of Max Verstappen fans, clad in the orange colours of Holland or Red Bull Racing’s distinct dark blue shade. Personally, I’m a Mercedes fan and support Lewis Hamilton but there is an undeniably special feeling of sportsmanship between the fans of different teams at Spa Francorchamps. 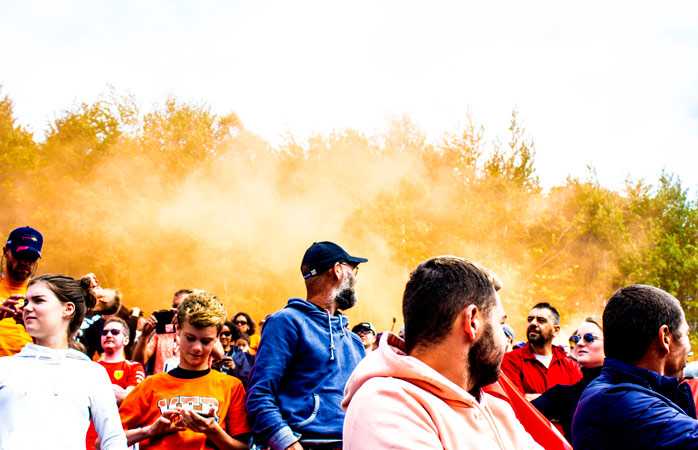 Where to Stay & How to get there

Even if you are early, accommodation prices at Spa skyrocket around the time of the annual Formula 1 race. Everything tends to get fully booked very quickly so your best option, rather than struggling to find somewhere to stay in Liege or the surrounding area is to look in neighbouring Germany (if you’re travelling by car).

We found one of the best Airbnb stays (Charmantes Ferienhaus) I’ve had the pleasure of buying – located in Simmerath, in the middle of the lush Eifel National Park. Located a mere 43 km away in the mountains, our Airbnb stay was the perfect antidote to the roars and skids of motors at Spa. Do yourself a favour and explore the Eifel National Park area while you’re there – it is one of Germany’s undiscovered pearls!

As we drove from Denmark, a trip down the autobahn was the easiest way to get to Spa. A tip for travellers coming from Scandinavia and Northern Europe would be to avoid hitting Hamburg and the Elb Tunnel area on a Friday, which tends to be one of the peak traffic days, particularly during the summer, when roadworks slow things down even more.

For those flying – Brussels or Cologne are the closest airports to Spa and I can recommend finding tickets via the convenient and easy-to-use metasearch tool, Momondo, who are also a really cool company when it comes to pushing for a more open and tolerant world through travel. You can also use Momondo to find hotel stays and car hire.

Find a flight with Momondo

Find a hotel with Momondo

Rent a car via Momondo

Getting tickets for The Belgian Grand Prix

Starting with the basics – Formula 1 tickets can be bought directly from the official Formula 1 webpage and in the case of The Belgian Grand Prix, retail for 125 EUR for Bronze tickets valid for the whole weekend. Since I drove there by car, we also included parking tickets for all days of the Grand Prix – which, including postage of the tickets and payment charges, ended up at 174 EUR per person.  Some would argue otherwise, but I think that Bronze tickets (there are also silver and Gold available) are more than ideal when it comes to experiencing a race at Spa Francorchamps.

Where to sit at The Belgian Grand Prix 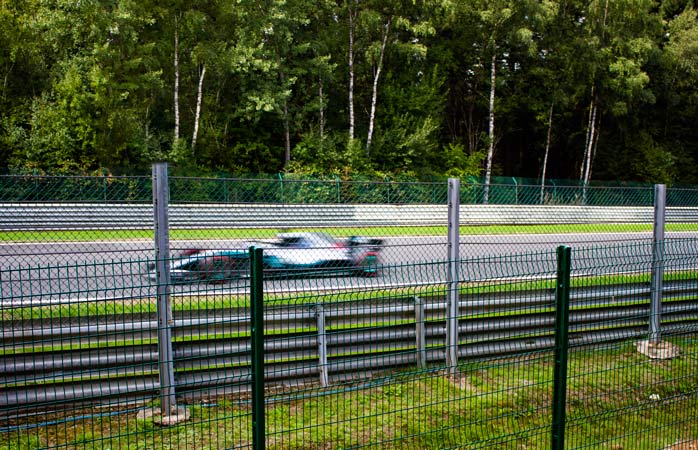 Blink and you’ll miss it. A Mercedes racer streaks past The Kemmel Straight at over 300 Kph! @Kortbaek_Travels

Spa Francorchamps has many different seating options for all ticket holders. As it’s a long circuit, it can take time to navigate from one area of the track to another, so have a good idea of where you would like to sit before race day.

Bronze tickets give you access to all race sessions from Friday through to Sunday so there is ample time to check out different areas of the circuit. Wherever you do sit though, I recommend that you have a  good view of one of the many giant broadcast screens so you can follow the race on the rest of the circuit.

I personally recommend sitting on the famous Kemmel Straight, just after the high-speed turns of Eau Rouge and Raidillon – two of the best corners in Formula 1, where downforce levels on the cars can be up to five times their weight (Eau Rouge.) The Kemmel Straight is one of the main overtaking opportunities at The Belgian Grand Prix, where speeds of up to 340 kph are clocked, with the drivers on full throttle for 20 seconds, so expect action on this part of the circuit.

Other good spots to sit at for Bronze ticket holders include the grassy hill at Pouhon and the Bus Stop chicane, which feeds into the pit lane entry. 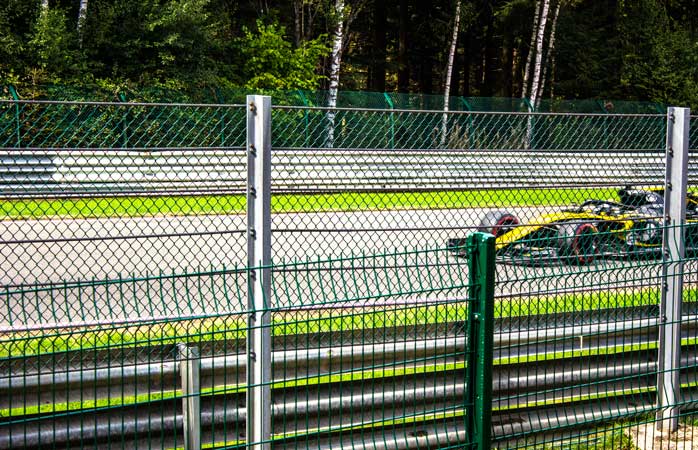 One of the Renaults’ whizzes by on The Kemmel Straight @Kortbaek_Travels

Parking at The Belgium Grand Prix

Parking tickets are a must if you are to get the most of your Spa experience and come included in your ticket price if you select them as add-ons. We parked close to the circuit entry by Combes Gate. There are four entry Gates to Spa in total -be prepared for waiting times and security checks as you go through them.

Dismal parking administration once the race is done means that you should be prepared to spend up to 3 hours waiting to get out of the parking lot itself, as Europe’s best “every man for himself get out of the parking spot” contest kicks in, with each car squirming for the same outlet. While Spa’s rustic charm has its merits, this is one the elements of this experience we could have done without and something that the organisers must look to address in future years. 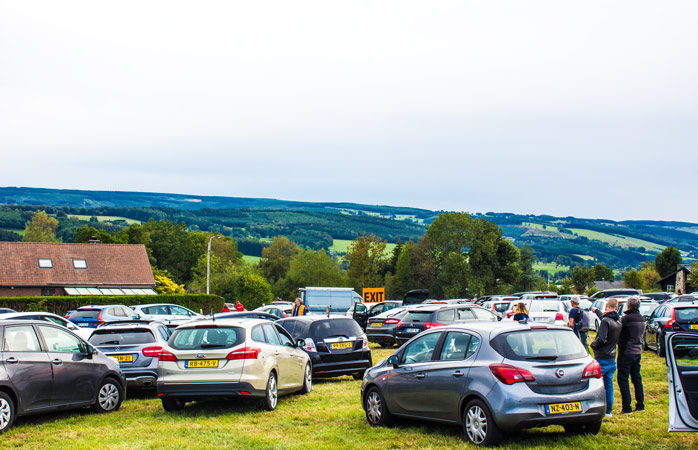 What session to attend?

A Formula 1 weekend packs experiences of all sorts in for the entire family. In addition to race day, you will probably also want to see some of the practice sessions on Friday and Saturday and of course, qualifying on Saturday. There are also Formula 3000 and GP2 races (seeding series for Formula 1 where some of tomorrow’s stars are doing their best to carve a name for themselves in motorsport). It goes without saying that on race day, the best seats in the house belong to the early birds, so get up in good time and find your spot.

This being Spa, be prepared to walk some distance to take a leak every now and again as things fill up very quickly. I can also advise bringing or buying something to sit on – either camping chairs or simply foam plates, as it can be wet, muddy and uncomfortable to sit at some areas of Spa. The build-up to the race is also an event in itself. As such, get your lunch well before the Driver’s parade around the track (the closest most people will ever come to their racing idols) so you can also experience this element of the race. 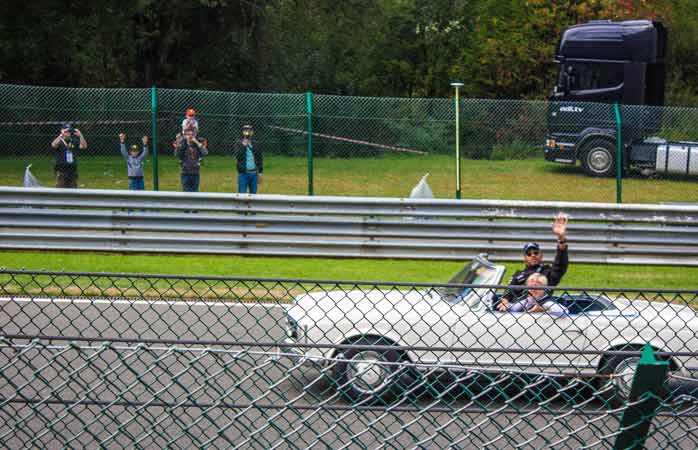 We were unfortunate enough to have Disc Jockey, two Twerkers and a very bad MC across the track from us who, tasked with warming the crowd up, did a very poor job of churning out a mix of cheesy requests, loud, unbearable hard dance music and dance moves that should probably never have seen the light of day. This dynamic quartet also managed to disconnect the sound from the paddock and race commentary and were eventually booed off by most of the spectators.

A full map of the track can be found below or via the link in the caption. 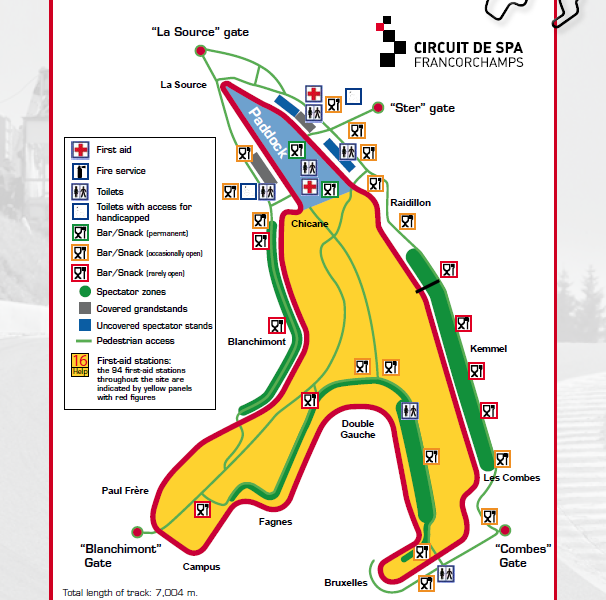 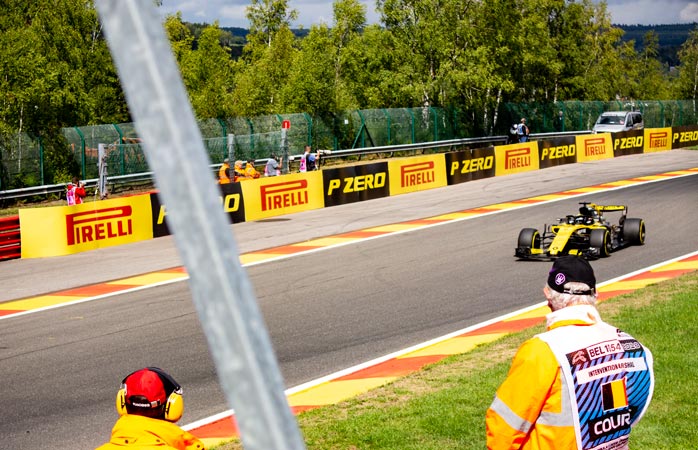 Renault had a bad race at Spa, with Nico Hulkenberg causing a turn 1 melee at the start of the race @Kortbaek_Travels

After a tense Saturday qualifying session which saw the rain wreak havoc late on in the session, Mercedes were well-poised to put in a strong showing at The Belgian Grand Prix. Come race day on Sunday, however, and Ferrari’s Sebastian Vettel had other plans. Powered by the best-performing engine of all the cars in the field, he took the lead on The Kemmel Straight early on, flying past Lewis Hamilton and going on to build an unassailable advantage lap by lap.

Further down the advancing pack, Renault’s Nico Hulkenberg missed his braking point by some distance into the first corner, sending Fernando Alonso’s Orange McLaren hurtling over the Sauber of Charles Leclerc – an incident that brought out the yellow flags and spiced things up for the spectators. Vettel went on to win, followed by Hamilton and Max Verstappen in his Red Bull racer, some distance off the pace but on the podium in front of his legions nonetheless.

What to bring with you on your trip to Spa Francorchamps 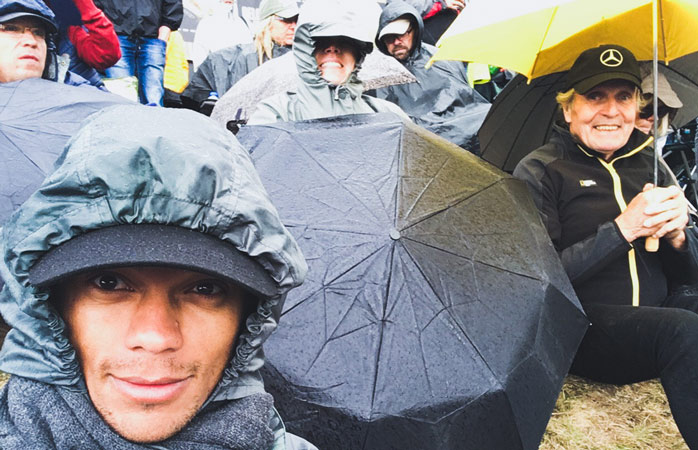 Be prepared for a bit of everything at The Belgian Grand Prix! @Kortbaek_Travels

Last but not least, as with most of the content I will be producing, here is a list of what to bring with you on your trip: